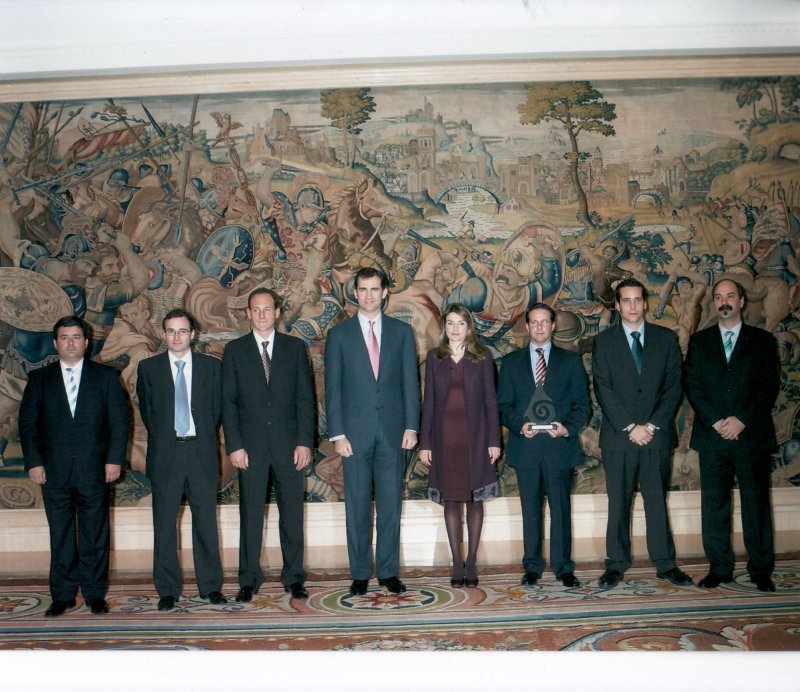 On Tuesday 27th last at the Zarzuela Palace, their Royal Highnesses the Prince and Princess of Asturias received in audience the management of this firm, the recipient of the European Business Award for the Environment 2006.
Their Royal Highnesses and delegates from DTS OABE.
Madrid. On the 27th, the Prince and Princess of Asturias, HRH Don Felipe de Borbón and HRH Doña Letizia Ortiz Rocasolano, have received in audience at the Zarzuela Palace the managers of the company DTS Oabe, headquartered in Orozko, in the province of Bizkaia.
DTS Oabe is a full member of the World Technology Network (WTN) following the recent World Technology summit held in San Francisco (California, USA), which it attended as one of those shortlisted for the Global Awards, as the producer of a non-contaminating water-based, lacquer applied insecticide called Nupilac Hidro.
This event is the culmination of a series of professional accolades and successes that have become increasingly more numerous since 2006, beginning with the Basque government’s recognition, continuing with the National Environmental Award, the European Business Award for the Environment and the shortlisting for the Global Award, whereby DTS Oabe has joined the world’s technology elite.
Nupilac Hidro is a revolutionary breakthrough in insecticides, as it is designed to reduce or eliminate the environmental drawbacks of traditional lacquers, being free of dermal or inhalation toxicity, non-inflammable, and with no atmospheric gas emissions. One of its main features is that it can be used in schools, hospitals or catering facilities, removing the need to close the premises following the product’s application.
The various juries have commended the project presented by DTS Oabe, noting “the unique nature of this insecticide product applied in lacquer form, which avoids air pollution and does not compromise human health” and highlighting the fact it “requires five times less insecticide, with no VOC emissions, and provides long-term efficiency”. They also acknowledge that the product has “no re-entry interval, so the product can be used in schools, hospitals and catering facilities, removing the need to close the premises following the product’s application”.
Although it has only been operating for just over three years and has only five members of staff, DTS Oabe has outperformed leading companies in the sector, and through its compliance with the principles of sustainable development it now lines up alongside numerous frontline companies.

Manage cookie consent
To offer the best experiences, we use technologies such as cookies to store and/or access device information. Consent to these technologies will allow us to process data such as browsing behavior or unique identifiers on this site. Failing to consent or withdrawing consent may adversely affect certain features and functions.
Manage options Manage services Manage vendors Read more about these purposes
View preferences
{title} {title} {title}